I will never forget the night that I met Billy Graham and spent fifteen minutes talking with him in a private, one on one conversation. Looking back, I can’t help but remember the times I heard him preach –

Six months after Dorothy and I were married, Billy Graham came to Australia for three months of crusades culminating in a month-long crusade in Sydney. Dorothy and I were both counselors in that great crusade and I still remember the final Sunday afternoon service with 150,000 people in adjoining arenas.

He came back to Australia again in 1968 and on this occasion I was an advisor overseeing counselors. The big moment for us was on the Sunday afternoon when our eldest daughter Beth, who was seven years old at the time, indicated that she wanted to go forward when the invitation was given by Billy Graham. Initially, I wasn’t sure she had been fully listening, let alone understanding but we soon realized she was serious. We led her to the front with all the others responding to the message of salvation and she made her decision for Christ.

Billy Graham came back to Australia and this time the venue was Randwick Racecourse. Interestingly, they used the same location as we did for the Jesus 79′ conference, which had actually given the crusade organizers a preview of what it could be like. It was on this occasion that I met Billy Graham personally. At this time, I was apart of the Ministers Sub Committee and the Chairman of the Crusade, Bishop Jack Dain, was kind enough to arrange for me to have 15 minutes one on one in a private room prior to one of the evening meetings. We talked about Australia, the Charismatic movement which at that time was in full swing, and the Holy Spirit (Billy had just written a book on the Holy Spirit). It was an unforgettable moment.

That night, I sat on the platform behind him during the service. To be honest, I can’t remember what he preached but I will never forget the crowds of people streaming out of the stands in response to the altar call.

I had the privilege of meeting him once more in 1996 and I often joke that I never forgot him, and he never remembered me.

Billy Graham came to the Metrodome in the Twin Cities, MN for a one week crusade in the summer of 1996. I was invited to be a member of the General Committee that sponsored the crusade and what a time it was. By the way, I was, if I remember correctly, the only nondenominational Charismatic on the committee. I always appreciated that Billy Graham was welcoming to Charismatics and Pentecostals as part of the crusades.

Who will ever forget the Saturday Youth Night with music by Michael W. Smith and DC Talk. The Metrodome rocked, Billy Graham preached and the young people responded. The final night saw 70,000 people in the Metrodome and 20,000 standing outside. What a night. What a crusade!

Sometimes Billy Graham, along with other evangelists, has been criticized for leading people to make decisions and then seeing many fall away later on. So let me tell you a story about how it can work. A minister I knew pastored a church about 50 miles from the site of the 1959 Sydney Crusade. They took busloads of people to the crusade. Over the month the crusade was running, they received fifty referrals of people who had made decisions. In every case, within a week, all these responders were led to a small group where they were bonded in with people from the church. Twelve months later, 48 of the 50 people had become members of the church. That is a 96% retention rate and it also shows the place and power of small groups.

There is enough said about this great man of God, so let me just share a personal insight. I have to confess that when I thought of Billy Graham, I thought of him simply as an incredible, anointed evangelist. I used to say he could read the genealogies of the Bible, make an appeal and people would still respond.

I never gave much thought to his leadership ability until I read the book ‘The Leadership Secrets of Billy Graham.’ When I finished reading it, I realized he was not just a great evangelist, but he was a great leader. It is a book well worth reading. It was then I understood more fully why he built such a lasting organization that maintained a reputation for integrity during a time when so many other Christian leaders fell away or were rocked in scandal. 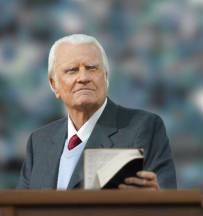 I thank God for Billy Graham, his life and
his ministry. The world has been a better place because of him and heaven has increased through the call to salvation that he made. Truly, like Paul’s testimony, ‘He has fought the good fight, He has finished the race, He has kept the faith.’ (2 Timothy 4:7)

Thanks be unto God!