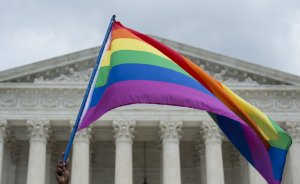 ‘It’s a sad, sad day for America,’ was my thought as I heard the news that the Supreme Court had decided, by a 5 to 4 decision, to legalize gay marriage. It’s a sad day when a nation, that was once built on a Biblical foundation, has embraced what the Bible plainly calls sin (See Romans 1). That’s like thumbing your nose at God. Many people wonder how all this has happened. Well, let’s have a brief look at the rise of the Gay Movement.

THE BEGINNINGS OF THE GAY RIGHTS MOVEMENT
Homosexuality has always been around. We live a fallen world and people commit all sorts of sin, not just homosexuality. In modern times, the gay rights movement dates back to 1969.

“Many people point to the Stonewall Riots as the bellwether of the gay rights movement. In the early morning hours of June 28, a police raid on a Greenwich Village gay bar at the Stonewall Inn ended with law enforcement being pushed back. Three days of rallies later, a new wave had taken shape. The gay rights movement had come crashing out of the closet, and America would never be the same.

The Gay Liberation Front was formed and took up the more radical tactics of the antiwar left. The original incarnation of the gay rights movement reached its apex in 1989, when protestors under the ground name ACT UP stormed St. Patrick’s Cathedral in New York City one Sunday during mass. These protestors were demonstrating against Cardinal John O’Connor, shouting slogans, carrying signs, throwing condoms, and crushing the consecrated wafer of the Lord’s Supper into the floor. It was a public relations fiasco, and the movement viewed that moment as a setback.

In contrast to the more radical action of the GLF and ACT UP, other activists took a more measured, culturally savvy approach. Their strategy was outlined in what could be called the ‘public-relations bible’ of the movement. This document was coauthored by two brilliant Harvard-educated thinkers, one a researcher in neuropsychiatry, the other an expert on public relations. Published in a magazine in 1987, originally called ‘The Overhauling of Straight America,’ and later released in book form as After the Ball, this multi-step strategy reads like a historical retrospective of the gay rights movement penned in 2013. It reframed the movement, pointing them away from the antiwar-style radicalism of the ACT UP crowd and toward a more public- friendly marketing approach.” (Taken from Compassion With out Compromise pg 138)

THERE IS A GAY AGENDA
The contemporary attitude towards homosexuality is the result of a decade long campaign. that sought to change the mind and attitude of Americans. It succeeded, especially with the new millennium generation. It was aided by the media, pop culture, education, arts, movies, TV programs, as well as government and it became like a cultural avalanche.

However, we need to know where it is going.

“What you need to hear is this: One of the key aspects of this campaign involves a turning of the tables. Essentially, once the LGBT (Lesbian, Gay, Bisexual, Transgender) agenda has gained sympathy (mission accomplished), then normalcy (mission accomplished), a critical component remains: to demonize those who are recalcitrant. To demolish the remaining opposition.

In subtle and sometimes not-so-subtle ways, the weight of a movement with forty years’ steam behind it is bearing down on those of us who are willing to love people but not tolerate falsehood. Our world has already begun to reprimand those who do not celebrate the LGBT message. Ironically cloaked in the sacred vestments of victimhood, a socially, politically, and economically powerful force is unleashing war on any form of opposition – whether it’s an unwillingness to photograph a wedding or bake a cake, a teenager’s desire to overcome same-sex attraction through counseling, or lifestyle standards for the leadership of a Christian college campus group. Those who take such stands will be pressured by a force that feels nearly irresistible. (Taken from Compassion With out Compromise pg 139)

The LGBT community has an agenda. It is a strong, organized movement and its goal is to silence all opposition. Though they and others have long proclaimed the message of tolerance, they are no longer tolerant of views contrary to their own, especially those of Bible believing Christians.

BEN CARSON
Dr. Ben Carson, who is running for President, saw this happen in his own life. As a nationally renowned director of pediatric neurosurgery at John Hopkins Hospital, he was invited to be the commencement speaker at the school’s graduation. However, he was accused of being homophobic by a group of gay activists and Dr. Carson withdrew because of the controversy it created. Prior to his withdrawal, he met with some prominent members of the gay community at John Hopkins and in the course of this meeting asked,”If there was any position a person could take that did not include the approval of gay marriage that would be acceptable to the gay community. After some consideration, he was then told that there really was no other acceptable position.” He goes on to note,”This explained why there was such a ferocious attack on my comments – there really was no argument that could have been made that would not have drawn an emotional response instead of a rational argument.”

We are in a war and those who embrace the LGBT message are not interested in taking prisoners. Rather, they want to demolish the remaining opposition. The Supreme Court’s decision gave them more ammunition to do this.

SO WHAT DO WE DO?
In the next Langstaff Letter I will share a message on ‘How shall we live in a post Christian society.’ However, let me share a few things.

1. We have to recognize that we lost this battle because the LGBT movement was more committed to their cause than the church was committed to proclaiming Biblical values regarding homosexuality. Indeed, just the opposite happened, as many traditional denominations welcomed it.
2. We will need to develop educational programs that will present the reasons for and the benefits of a traditional marriage. We need to help our children and young people resist the pressure that they will face in school, college and the world.
3. We need to recognize this is a spiritual battle and not just a political or legal one. The enemy hates traditional marriage. It is a constant reminder to him of the relationship of Christ, the bridegroom and the church, the bride. It has come to the point where ‘people will call evil good and good evil. ‘ Isaiah 5:20.
4. Let’s remember we are all sinners and all of us need salvation. Let’s respond in love and pray for the gospel to come to the gay community. We also need to repent for the failure of the church to be the salt of the earth and the light of the world.
5. We should be believing and praying for a mighty spiritual revival to flow over our land. Many times in our history, when we have reached a low point in a national spiritual life, God has brought great awakenings to our nation. Let us believe for that to happen again in our time. The promise of Isaiah 60:1-2 is that in the midst of ever increasing darkness, the glory of God will be seen on His people.

Reference Books – I would recommend two books on the subject of homosexuality.

Compassion Without Compromise – How the gospel frees us to love our gay friends without losing the truth. Written by Adant Barr and Don Citlau (who is an ex homosexual)

Can You Be Gay and Christian? – Responding with love and truth to questions about homosexuality. Written by Michael L. Brown. This is a very comprehensive treatment of the subject of homosexuality.